One day while looking at the Seating Dynamics YouTube channel, I came across a video of a young man named Eddie using a dynamic back. We were able to contact his Mom, Megan, who was kind enough to speak with me by phone. Eddie is a 16 year old young man with the diagnosis of spastic cerebral palsy and epilepsy. Eddie went from a Kid Kart to a Zippie Iris and is now in a PDG Stellar with a Ride Designs back. He has been using a Seating Dynamics Dynamic Rocker Back interface since May of 2016. 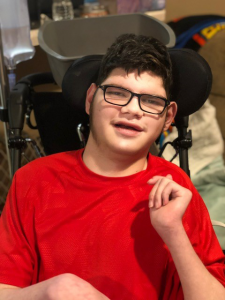 Megan, has the dynamic back made a difference for Eddie over his previous static back?

“Yes! We are extremely happy with it. My son has done some serious damage to his previous chairs. This (dynamic back) has made a huge difference in his life, for sure.”

“He is definitely not injuring himself because the chair moves with him and he is not ramming himself into the chair. He would lean forward and then throw himself back, often hitting the laterals or getting stuck on the side of the laterals. Now he has a molded back and no longer needs laterals.” Megan explained that because the dynamic back provides the movement Eddie needs, he no longer leans forward and throws himself back, instead he just rocks with the back movement.

Have you seen less extension since using a Dynamic Back?

Megan also explained that Eddie would previously extend in his wheelchair seating system, leading to friction on his back. “He looked like he had a rug burn on his back all the time.” Now that he uses Dynamic Seating, the skin on his back has returned to normal. “Rather than standing in the chair when he is upset, the back moves and Eddie doesn’t lose his posture. There is definitely less force to his extension.” 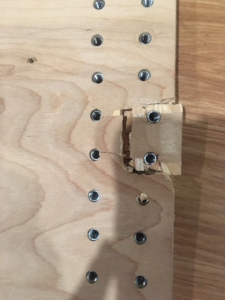 Broken wheelchair back before Dynamic Seating

Has Eddie broken anything since receiving the Dynamic Back?

“Before receiving the Dynamic Back, Eddie broke things all the time – lateral pads, the wooden base of his back, and his footplates. Since he got this back, nothing has broken! He also no longer has any bruising (from hitting the laterals).”

How does Eddie move in the wheelchair with the Dynamic Back?

“When he first got the Dynamic Back, he rocked all the time. He doesn’t move as much now – I think it is because he knows he can if he needs to.”

I told Megan that I have seen a similar response in many people I work with. As long as the client does not feel that point of resistance from a static back, there is less movement over time.

When do you ‘lock-out’ the Dynamic Back?

Do you have any other thoughts?

“He enjoys life more now. I also think he gets feedback from the chair when he moves with it.”

Thanks so much to Megan and her son Eddie for sharing some of their story. If you have a story to share, please leave a comment below. Perhaps we can talk soon!

Check out a video of Eddie moving with his Dynamic Seating DRBi!